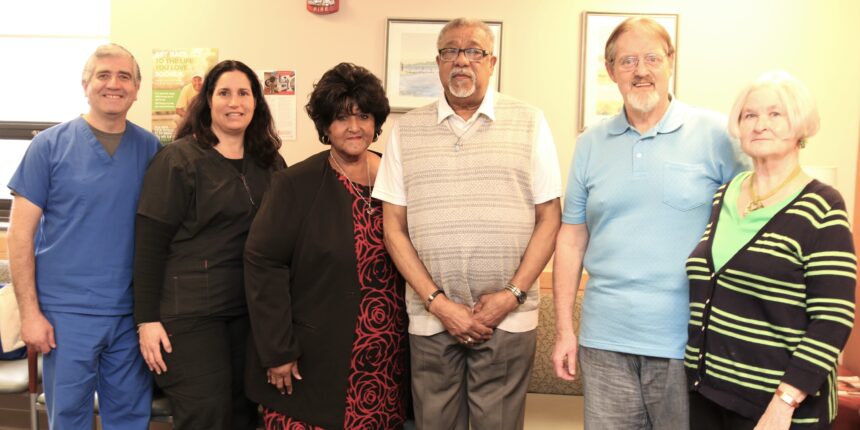 Chronic wounds can have severe consequences on your health – but they can be healed at Southcoast’s Wound Care Centers in Fall River and New Bedford. Kenneth Ribeiro knows all of this as well as anyone.

Last April, Kenneth started experiencing tenderness and pain in his foot. Hoping to ease his pain, he began limping. Kenneth’s wife, Robin, a retired registered nurse of 35 years, knew something was not right. With a trained eye for injuries, Robin questioned his limp.

The response from Kenneth? “I just have a sore callus on my foot.” But the cause of his pain was much more severe than a callus.

Several days later, Robin insisted on examining his foot. She noticed right away that Kenneth needed to be checked out by a physician. Robin brought him to St. Luke’s Hospital in New Bedford. Based on his symptoms, he was seen by cardiologist Dr. Alfred Lin. Several tests were performed, and Dr. Lin identified a vascular blockage. Dr. Lin referred Kenneth to the Wound Care Center after treatment to improve blood flow and ease discomfort.

Kenneth’s cultures and scans showed a diagnosis of osteomyelitis, a bone infection. Feeling relieved, he left the hospital with a prescription of antibiotics and the optimism that life would return to normal.

A short time later, Kenneth’s optimism dissipated. He felt something was not right. His wife arrived home to find him in a state of anguish and promptly drove him to Charlton Memorial Hospital in Fall River.

He was immediately admitted due to his climbing temperature. A week in the hospital and several antibiotic concoctions later, physicians were still struggling to remove the infection from his bone. Dr. Gerald Monchik, Medical Director of the Wound Care Center, called in for reinforcements. He recruited Dr. Antonio DeMelo, Podiatrist and Wound Care Specialist, and internal Infectious Disease Physician. Dr. Monchik also enrolled Kenneth into Hyperbaric Oxygen Treatment for enhanced wound healing.

Dr. Monchik and his team placed Kenneth at the center of their care. Kenneth recalls Dr. Monchik saying, “The most important part of our team is you.” From that moment forward, Kenneth was committed to his treatment plan.

Nine months and 52 Hyperbaric Chamber visits later, Kenneth has a new lease on life. He credits Southcoast’s Wound Care Center staff with not only saving his life but bringing him friendships he never expected to make.

When sharing stories of their warmth and goodwill, he mentions Nicole Cairrao, a Hyperbaric Safety Officer and Technologist, who consistently delivered the highest level of compassion and care.

“Nicole sat with me and explained everything,” Kenneth says. “She never spoke at you, but always to you. She was highly knowledgeable and never left you wondering. Her attention and care left you feeling better. I grew very close to the staff. They’re all unbelievable. They encouraged me to ask questions and viewed me as a teammate.”

With each visit, he befriended new staff and patients and returned home feeling like part of a family. His treatment connected him with patients who shared similar diagnoses. For instance, Kenneth connected with one patient, whom he fondly refers to as “his twin.” Their friendship blossomed; even their wives became close friends. The couples chat several times a week and enjoy going out for breakfast and lunch together.

“The Wound Care Center treats you as if you were family,” Robin says. “They give their very best. The doctors, nurses, and caretakers work together as a team. I’ve never seen a more exceptional medical staff in my 35 years of nursing. They share the burden of every patient that comes in, and they give everybody hope.”

“Before, I wouldn’t leave my house, I had no appetite, and I could barely walk,” he says. “Now, I can walk without a cane; I can go out. The Wound Care Center gave me my life back.”

Southcoast Health’s Wound Care Center offers aggressive treatment through the latest clinical modalities. But most importantly, they offer a team of specialists providing best-in-class care, compassion, and comradery to every patient who walks through their doors.

Learn more about the importance of chronic skin wound treatment and how Southcoast Health is honoring our Wound Care Centers during Wound Care Awareness Week.