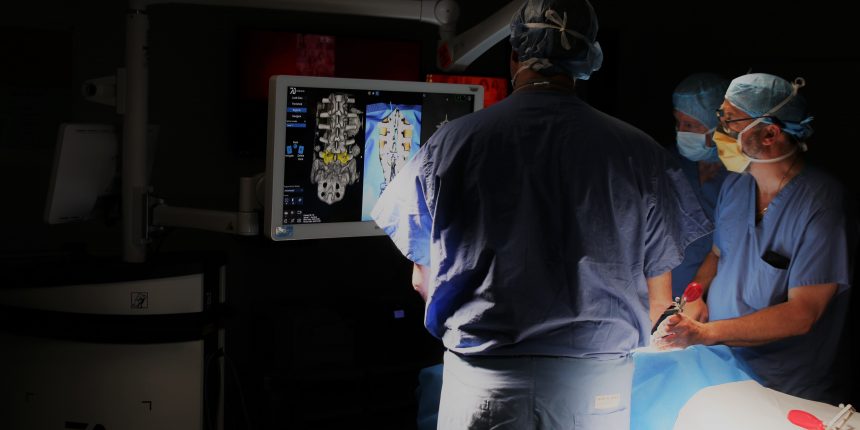 The surgery was a posterior lumbar interbody fusion, officials said, and took place at St. Luke’s Hospital, where Philips’ father was also a surgeon.

The 7D Surgical System uses machine-vision-guided navigation to provide real-time three-dimensional images, allowing for a safer, more seamless operation devoid of the radiation required during standard fluoroscopic spinal surgeries, which can take far longer and pose greater risks for both patient and surgeon, said Philips, Chief of Neurosurgery at Southcoast.

In 2019, Southcoast became the first healthcare organization in Massachusetts to adopt the technology.

“Southcoast neurosurgery is leading the charge in technology above everyone else in Massachusetts and Rhode Island, and, actually, many or most similar centers in the United States,” said Philips. “The fact that we are the second-busiest group overall in regard to employing what is, in my opinion, the most advanced and safest technology in spinal surgery, reconfirms the convictions I’ve always had, which are that our Brain & Spine team does this work as well as anyone, and Southcoast’s investment in our region’s public health drives everything we do.”

7D Surgical System representatives were on site at St. Luke’s for the 200th procedure.

“We are thrilled with the partnership at Southcoast Health and congratulate Dr. Philips and the Southcoast Brain & Spine Center on achieving the impressive milestone of 200 cases completed using 7D Navigation,” said Beau Standish, CEO and Co-Founder of 7D Surgical. “Southcoast was an early adopter of the 7D Technology, and with Dr. Philips’ entrepreneurial and technically focused mindset, he saw the value that the 7D System brought to his practice – a safer, faster, and radiation-free surgery for his patients.”