Home / Southcoast News / Health Tips / More and more, heart disease has emerged as a risk for women, too

More and more, heart disease has emerged as a risk for women, too 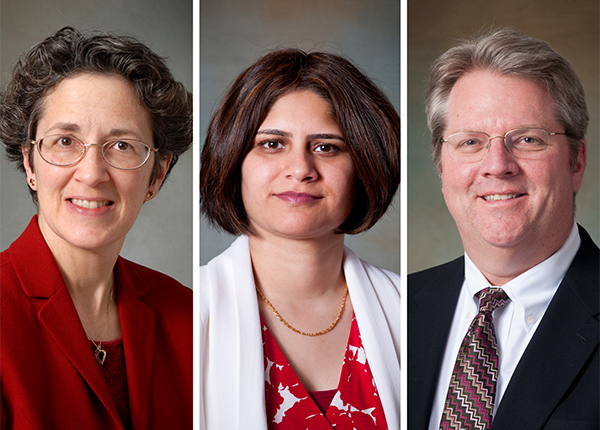 Heart disease accounts for more than one in five deaths — a total of about 300,000— among women in the United States each year, according to the Centers for Disease Control and Prevention.

“That’s as many as all cancers combined,” says Southcoast Health cardiologist Dr. Nosheen Javed. Many of those deaths are preventable, among both men and women, with healthier lifestyle choices.

February is National Heart Month, and cardiologists at the Southcoast Cardiovascular Care Center at Charlton Memorial Hospital are cautioning women to heed the same advice often directed at men — avoid the risk factors that can lead to heart disease.

“Historically, women have been felt to be more protected from heart disease, and thus many risk factors and symptoms have been discounted or ignored. We now know that women are at similar risk and can present differently than men,” says Dr. Robert Schwengel.

There are often differences between what heart disease looks like in men and women. Women may present different symptoms than men when they are having a heart attack.

“Women can present the classic symptoms common in men, and thus should not be ignored; however, women have a higher incidence of atypical symptoms,” says Dr. Schwengel.

Dr. Javed adds, “Symptoms in women can be a lot more subtle.”

Instead of crushing chest pain, women suffering a heart attack might complain of one or more of these symptoms:

For a long time, heart disease and especially sudden death from a heart attack were thought to be more common — and lethal — in men, says Southcoast Health cardiologist Dr. Maryanne Noris.

“It’s a bias we’ve had that women don’t get heart disease,” says Noris.

In the past, randomized clinical trials focused mainly on men, so it wasn’t understood that women tend to develop heart disease when they are older and show symptoms that appear to have other causes. That has changed as more women and other populations are represented in trials. But women may still miss or ignore symptoms of heart disease until they suffer a heart attack or other cardiac event.

“A lot of women put the health of their families first,” says Noris. They forego doctor visits in favor of bringing their children or elderly parents.

In addition, women also are far more likely than men to suffer a life-threatening condition that can result from periods of intense stress. It’s called stress-induced cardiomyopathy, which causes rapid and severe heart muscle weakness. This “broken heart syndrome” sometimes occurs during childbirth or at the death of a significant person in their lives.

Prior to menopause, estrogen tends to protect women from heart disease unless their lifestyle choices increase their risks. For example, women who smoke lose the advantage that normal estrogen levels provide to nonsmokers, Noris says.

And in southeastern Massachusetts, smoking rates are double the state average for both men and women, with the highest rates in the cities of Fall River and New Bedford.

In addition, Drs. Noris and Javed say that other preventable risks are higher in southeastern Massachusetts, including:

The cardiologists say, however, that it is never too late to benefit from improved habits, including eating healthier, quitting smoking, exercising, losing some weight and managing stress.

Having a good circle of friends, being engaged with others and “taking time for yourself” also can make a difference in preventing heart disease. Hobbies, meaningful work or other sense of purpose also are linked to heart health.

If you or a loved one do experience symptoms that suggest a heart attack, don’t wait. Call 911 and describe the symptoms to the dispatcher. Ambulances are equipped to treat heart attacks, and they will deliver you to the closest hospital with a cardiac care unit where you will be seen immediately.

“Do not,” says Javed, “drive yourself to the hospital.”