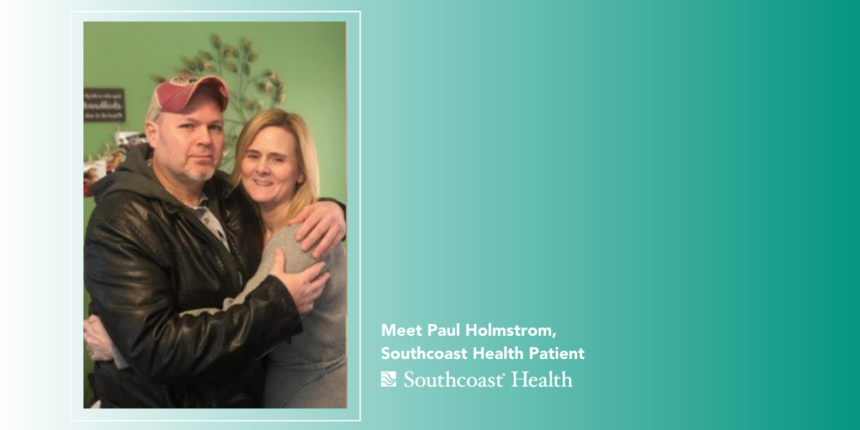 For 26 years, Paul Holmstrom coped with ever-worsening heartburn that was not eased by diet and eventually failed to respond to medication.

“It made life miserable,” he said. “A glass of water could set it off. An apple, a candy bar, a cracker or spaghetti, I never knew what would start it.”

It wasn’t until November 2021, when Dr. Donald Colacchio performed an innovative, minimally invasive procedure at Tobey Hospital, that Holmstrom could live symptom-free for the first time since he was 25 years old. Southcoast Health is the only hospital system south of Boston to offer this procedure, known as the LINX Reflux Management System.

Heartburn occurs when the esophageal sphincter, a muscle at the base of the esophagus that opens to allow food into the stomach and closes to keep stomach contents from escaping, weakens or relaxes. That allows stomach acids to flow into the esophagus and produce a burning feeling.

A regular pattern of acid reflux, two or three times a week, can indicate gastrointestinal reflux disease (GERD). GERD itself is not life threatening, but, if left untreated, can change the esophageal tissue causing pre-cancerous Barrett’s esophagus.

When he was referred to Dr. Colacchio, Holmstrom was experiencing severe acid reflux every night, and often during the day, starting with a burp and frequently leading to nausea. He spent his nights on a recliner to reduce his symptoms by elevating his torso, but he slept poorly. He commutes from his Fairhaven home to Boston, where he works on commercial construction sites as a union foreman. He was often exhausted from lack of sleep, and when heartburn would start at work, he’d take an antacid, sit down for a while and sometimes vomit.

His doctors had prescribed a variety of drugs over the years, and he regularly popped antacids, such as Tums or Rolaids, which he and his wife always carried with them. However, the medications were no longer working.

He visited several doctors, but no one could help him until he saw Dr. Colacchio, at the suggestion of his wife, Kathy, who is a patient intake specialist at Southcoast Health and a recipient of the 2015 President’s Award for Excellence.

Dr. Colacchio said Holmstrom was a candidate for the LINX, which supports the esophageal sphincter with a quarter-sized bracelet of titanium beads. The beads are attracted to each other magnetically, making the band weak enough to allow food to enter the stomach and enable belching or vomiting, but strong enough to prevent the stomach’s contents from leaking out.

After undergoing tests to determine the strength of his esophagus muscle, Holmstrom underwent the procedure at Tobey. Dr. Colacchio implanted the LINX band laparoscopically, and Holmstrom was discharged the same day. After two weeks on a diet of liquids, puddings and Jello, he could slowly add solid foods.

“Within a month, I was eating normally and it was like I never had GERD,” he said. “Last night, I had a cheese burger at 8:30, and I slept through the night in my own bed.”

Holmstrom’s life has been restored, and he credits Dr. Colacchio.

“Before, I was constantly watching what I ate and I could never drink or eat after 8 p.m.,” he said. “Now, the best thing is that I have my life back.”