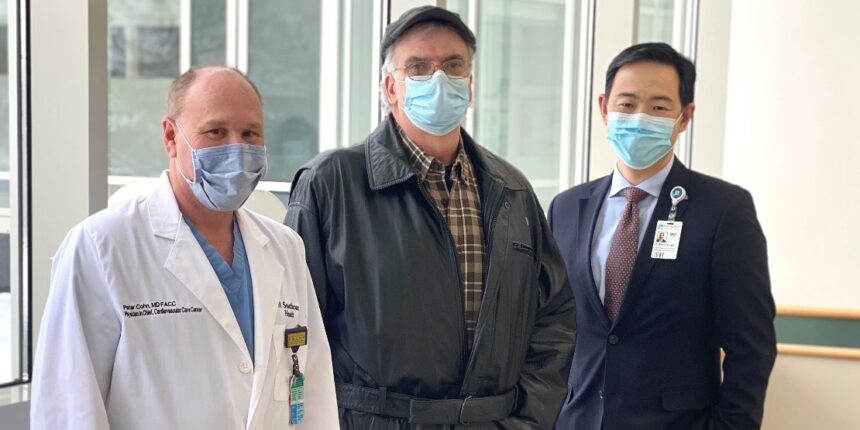 It Takes a Full Spectrum of Heart Care

What started as a normal day in September quickly took a turn for the worse when Joe Alves didn’t feel well after exercising.

He drove home and called his girlfriend, Gail, complaining of chest, neck, and jaw pain. Gail knew that Joe wasn’t one to complain, so she immediately called 911 and rushed to his home. Due to Gail’s quick thinking, the ambulance arrived at Joe’s home moments after her. The EMTs were able to stabilize Joe, although his blood pressure had dropped and his complexion discolored. The EMTs decided to bring Joe to Charlton Memorial; all Joe remembers is waking up in his hospital bed.

At 67 years old, Joe had worked as a boat builder for over 40 years. He was active and enjoyed going to the gym after work. Although relatively healthy, he had an inactive aortic aneurysm that was being monitored – and would later play a critical role in his treatment.

Dr. Peter Cohn, the Physician-in-Chief of the Cardiovascular Care Center, was on call for the Cardiac Critical Care team that day. Prior to caring for Joe, he reviewed his medical history and made note of the aneurysm. Although Joe’s chest pains were indicative of a heart attack, Dr. Cohn found that he had a prominent murmur and unequal blood pressure in each arm. Before further treatment, he sent Joe for a CT angiogram (a dye test that looks for tears in the aorta). In Dr. Cohn’s experience, he knew that if something had happened to the aortic aneurysm, time was of the essence.

Within five minutes, the results from the CT scan came back showing Joe suffered from an aortic dissection – not a heart attack.

“With this type of diagnosis, if you don’t act on it immediately, the mortality rate is very high,” Dr. Cohn says. “If you don’t fix this right away, the patient will die.”

A quick response to Joe’s condition was made possible by Charlton Memorial’s specialized cardiac Emergency Department and onsite cardiac surgeon. Eliminating the need to transfer him to Boston saved valuable time and avoided additional complications to this already life-threatening condition.

The Cardiothoracic Surgeon on call was Dr. Peter Lee. He arrived just minutes after the results of the CT scan came back. He spoke with Gail, explaining time was invaluable with this diagnosis. At roughly 6pm (less than two hours after his arrival to the hospital), Joe was admitted into life-saving surgery.

Nearly 10 hours later, Dr. Lee and his surgical team were able to repair Joe’s aortic dissection and stabilize him. He then spent a few days in the Cardiovascular Intensive Care Unit and was discharged on his 68th birthday.

“He went from having a life-threatening condition that many people die from, to home in a week. It was incredible,” says Dr. Cohn after providing follow-up care.

Back home, Joe has a long road to recovery. However, having access to a full spectrum of heart care – close to home – he is lucky to be alive.

“They were so efficient at Charlton Memorial, and I’m so impressed. I would recommend them to everybody,” Gail says. The Cardiac Critical Care team’s ability to quickly identify the problem, review his medical history, and treat him urgently saved his life.

Today, Joe shares; he is regaining his strength and back to most of his normal routines. This month, he even starts work in a new role, and thankful for a second chance.