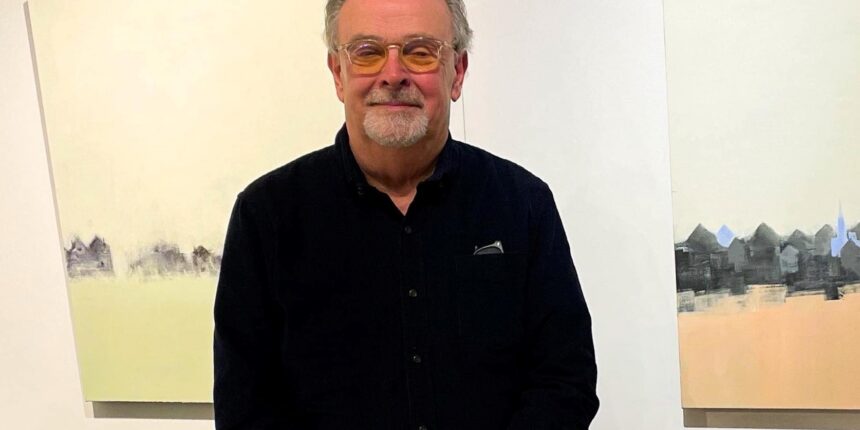 The advantages of robotic surgery at Southcoast Health

“This summer was pretty good,” New Bedford native Butch McCarthy says of his 2021 music gig schedule. “Though now things have dropped off (due to COVID), and I am focusing more on my art these days.”

Butch has spent much of his life in music entertainment and fine arts – oil on canvas to be precise. He has shown his works in various galleries and is sure to spend at least a couple hours a day in his studio painting. Though Butch paints a rosy picture of his summer 2021 music schedule, the season also brought this local artist some unexpected health challenges.

Butch developed abdominal pain that led him to the Emergency Department at St. Luke’s Hospital. His care team confirmed that his gallbladder needed to be removed, but also discovered a questionable spot on his kidney that needed to be assessed right away. He was referred to Dr. Dennis La Rock, Co-Chief of Urology and Chief of Robotic Surgery at Southcoast Health.

Dr. La Rock explained Butch’s scans to him, ensuring he had a full understanding of his condition, and all his questions were answered.

“I’ve never had a doctor do that for me, he says. “Dr. La Rock went over every image taken and explained everything. He really put me at ease. So much so that, even though I was facing a scary diagnosis, I was optimistic about my treatment.”

Butch was diagnosed with renal cancer. Dr. La Rock explained to Butch that he would perform robotic surgery to remove the affected area of his kidney. Robotic surgery performed with the da Vinci Xi robot – the latest and most advanced da Vinci system – would allow for smaller incisions, less scarring, greater precision and accuracy, and a faster recovery time. Dr. La Rock also told Butch that if kidney function was compromised, the kidney would need to be removed with an open procedure. Despite this news, Butch said that Dr. La Rock made him feel completely secure and positive about his upcoming procedure.

After surgery, when Butch awoke from anesthesia, Dr. La Rock was at his bedside to inform him that they had to remove the kidney. Butch says he felt relieved and assured that his care team made the right decision.

Butch’s next step was the much-needed gallbladder surgery. When asked about his three-month recovery and the stress of facing such daunting health issues, Butch says, “It really wasn’t so bad. Again, I feel that Dr. La Rock and my healthcare team really put me at ease and there wasn’t anything to worry about.”

Butch is feeling well these days. He still rides his bike and paints in his studio daily. Perhaps when the weather turns warm, we will see Butch playing music gigs out in the community.

Southcoast Health continually invests in the most advanced robotic surgical technologies to care for our patients. These minimally invasive tools include the Stryker Mako Robot for hip and total knee replacements, as well as the da Vinci Xi Robots, like the one used in Butch McCarthy’s care.

Technological investments are just a few of the many ways Southcoast continues to demonstrate commitment to the community, ensuring patients have timely and convenient access to exceptional comprehensive care close to home.