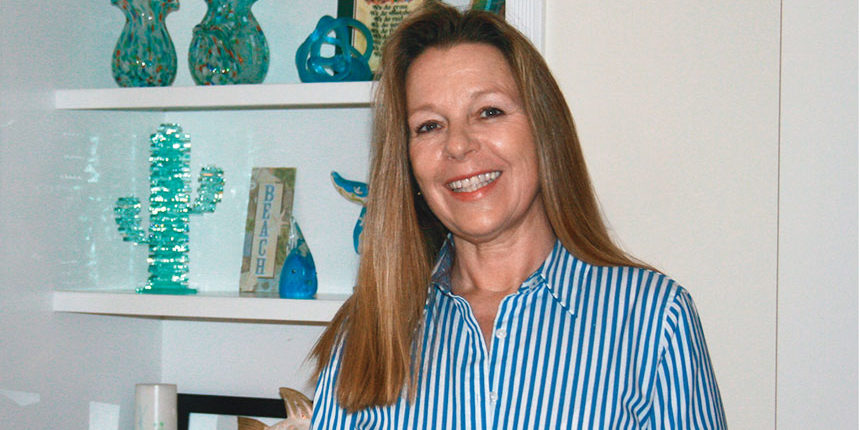 Like so many people, Brendalee O’Hara, of Tiverton, did not like the idea of having a colonoscopy when she turned 50. In fact, despite having what she describes as “self-diagnosed Irritable Bowel Syndrome” she put off the screening for three years.

Then her symptoms got worse, and she knew she could not put off the test any longer. It’s a good thing she didn’t. She was diagnosed with stage III rectal cancer.

“It was the day before my 53rd birthday and I was initially devastated,” Brendalee says. “But I am a firm believer in positive thinking, and I decided to view it as a blessing. If I had waited any longer, the diagnosis could have been even worse.”

To maximize her chance of cure, she underwent courses of radiation and chemotherapy, but she still needed surgery to remove the mass from her rectum. Her brother-in-law recommended Victor Pricolo, MD, Chief of General and Colorectal Surgery at Southcoast. Brendalee made an appointment to “interview” Dr. Pricolo and immediately knew she wanted him for the job.

“His demeanor was very calming, he spoke in layman’s terms and explained all of my options in detail,” she said. “I liked the team approach he described and I had a sense of relief after we spoke.”

In May 2015, Dr. Pricolo performed surgery at Charlton Memorial, removing Brendalee’s rectum, restructuring part of her colon to replace the rectum, and leaving her with a temporary ileostomy.

“The surgery Brendalee needed was very difficult and complex,” says Dr. Pricolo. “There are risks of bleeding, infections and changes in genito-urinary and bowel function.”

“People suggested I go to Boston, but I was not willing to do that without investigating what was available closer to home,” Brendalee says. “And I am glad I did, because even though the surgery needed a very high level of expertise, it was available right here with Dr. Pricolo.”

Her experience in the hospital was also a positive one. “The staff were so attentive and caring,” she says. “I can’t say enough about them.”

Brendalee’s surgery revealed the presence of cancer in two lymph nodes, which were cause for additional chemotherapy. Throughout the process, Brendalee was impressed by the collaboration between Dr. Pricolo and her oncologist, who worked in another system. “The coordination of care was excellent,” she says.

Dr. Pricolo was equally impressed with Brendalee. “Despite her situation, she had a very positive attitude,” he says. “She showed tremendous courage and a great sense of humor. Cancer was not going to stop her. She is such an inspiring example for all of us.”

In true form, Brendalee also took the ileostomy in stride. “I was so happy to not be held hostage to the bathroom after so many years of having problems,” she says. “After the first two weeks, it was really just a minor inconvenience.”

She and her husband were gradually able to get back to most of their activities. Outdoor lovers who live by the water, the two enjoy bicycling and kayaking, among other sports.

Part of a team

In October, Dr. Pricolo reversed the ileostomy, performing the surgery at St. Luke’s.
“At first I was disappointed that I was not going back to Charlton,” Brendalee said. “But the care at St. Luke’s was just as good. I had a great experience.”

Now, more than five months after the final surgery, two blood tests that were “perfect” and a colonoscopy that revealed no cause for concern, Brendalee remains grateful for her experience.

“At every point in my care, I felt like I was in control,” she says. “All my options were explained to me in terms I could understand. Dr. Pricolo always made be feel like I was the only patient he had, he always took time to listen. I felt like I was part of a team.”

Stay Ahead of Colorectal Cancers

Take these steps to catch colorectal cancers early, or even prevent them: