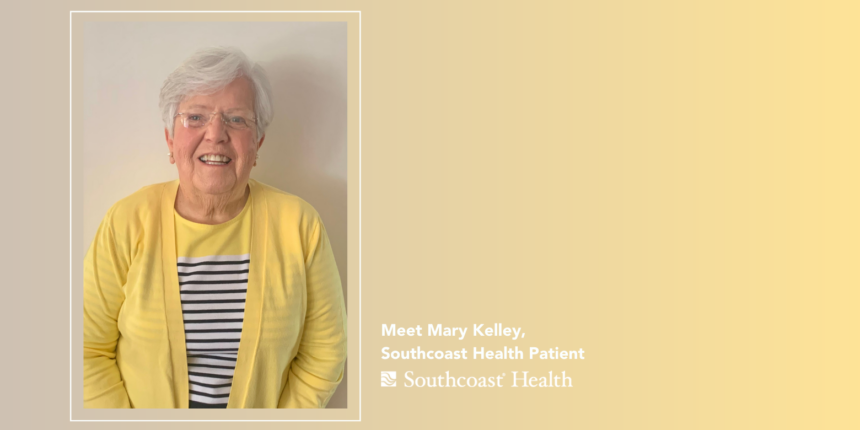 Mary Kelley started searching for a cure for her atrial fibrillation about 15 years ago, when she first noticed herself feeling faint and her heart racing.

Despite repeated treatments up in Boston, the irregular heartbeat persisted, causing her shortness of breath and difficulty climbing stairs. She stopped driving long distances and traveling, and she worried every time she left her house, never knowing when her heart would go out of rhythm or for how long.

Today, at 75, the Somerset mother of five attends her grandchildren’s baseball games, volunteers and is once again planning trips. She has her life back thanks to Dr. Nitesh Sood, a cardiologist specializing in electrophysiology at Charlton Memorial Hospital.

Atrial fibrillation (AFib) is an arrhythmia of the upper chamber of the heart that, left untreated, significantly increases a patient’s risk of stroke, heart attack and other severe health problems. In Boston, Mary underwent a cardioversion, which attempted to restore a normal heartbeat with electrical impulses, and two cardiac ablations to eliminate tissue responsible for the arrhythmia with heat delivered by a radiofrequency catheter.

Mary’s arrhythmia nonetheless continued, even though she had a pacemaker implanted and took strong medication designed to control AFib.

When her cardiologist relocated, she saw Dr. Peter Mandelson, a Southcoast cardiologist who referred her to Dr. Sood. She noticed his personalized approach right away. He took his time explaining his treatment plan and answering questions, even drawing pictures to help Mary and her husband understand.

“We laugh about it now,” she said. “But it really made you understand what he was going to do and how it would work. He made you feel like he had all the time in the world.”

Mary agreed to undergo two more ablations, called cryoablations because they freeze the cells responsible for the irregular heartbeat, causing less risk to healthy heart tissue than heat. Dr. Sood said he found problem cells that had escaped the first two ablations. However, the AFib returned within eight months after the first procedure and did not stop after the second.

At that point Dr. Sood explained that Mary’s options were limited to a difficult and invasive surgery or making her heart completely dependent on the pacemaker. Mary chose to live with her AFib, even though scar tissue in her heart made it painful.

Last year, however, Dr. Sood was one of five doctors worldwide offered the opportunity to work with a new software from Boston Scientific, a medical technology company in Cambridge. The RHYTHMIA mapping system generates 3-D maps of the heart that enable arrhythmia-causing cells to be identified in areas that are not typical for the disease. This software is referred to as OKKHUM.

Dr. Sood and the team at the electrophysiology lab at Charlton Memorial Hospital performed a fifth ablation on Mary that finally reduced her AFib to rare and brief episodes.

As a result, Mary was confident enough to travel with high school friends to Ocean City, N.J., this spring, and is planning to accompany her husband to Florida in the winter.

“I have a better outlook now,” she said. “I’m not afraid of doing things.”

Dr. Sood said he credits Mary for her willingness to undergo five ablations, when patients rarely have more than two or three.

“I also give credit to the EP team at Charlton Memorial,” he said. “My part was the easy part.”

Mary advises women to be aware that they can be as susceptible as men to cardiac problems, and not to ignore their symptoms.

“I wasn’t crazy about going for each ablation,’ she said. “But when you have a hard time functioning and having a normal life, you do what you have to do. And Dr. Sood and everyone else I worked with at Southcoast Health was wonderful. They were not only professional, but friendly. They made you comfortable.”