A Heartfelt Thank You to the Massachusetts National Guard 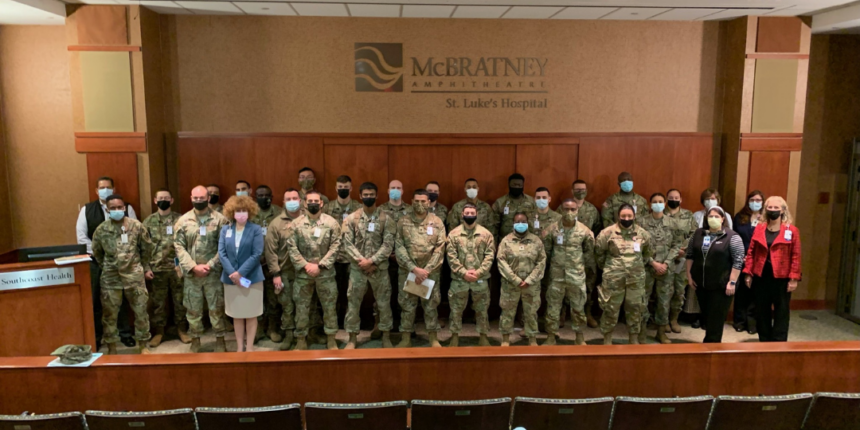 Frontline healthcare workers have been front and center in the war against the COVID pandemic, but members of the Massachusetts National Guard also have been in the thick of the fight at Southcoast Health hospitals since early January.

More than 40 members of the National Guard have been working in support of medical staff at Charlton Memorial, St. Luke’s, and Tobey hospitals to turn the tide in the two-year battle against the disease, which has led to more than 230,000 cases and 4,300 deaths in Bristol and Plymouth counties alone.

Twenty Guard members from at least eight units around the state have been providing security, supply and transport at St. Luke’s in New Bedford, 19 are working at Charlton Memorial in Fall River, andfour are at Tobey in Wareham. The Southcoast hospitals are among about 60 statewide where Guard members are helping.

“In the beginning, when we were dealing with surge capacity in all three hospitals and emergency departments, staffing was an ongoing challenge, as it was across the country,” said Southcoast Health Executive Vice President & Chief Operating Officer Renee Clark. “Even during the most difficult times, they were so helpful, really professional, and eager to be here. It improved the mood of the staff to have them here, because our medical professionals were feeling overwhelmed and so tired. Guard members were a breath of fresh air.”

Caring for the Community

All the Guard members live within 30 minutes of the hospitals where they work, said Sgt. John Bates, 29, an Army National Guard Military Police officer who lives in Dartmouth and is in charge of 19 other Guard members who have been working at St. Luke’s since early January. His father is a longtime respiratory therapist at Charlton Memorial.

“It feels good to be serving your community in uniform,” said Bates, who graduated from Bishop Connolly High School in Fall River and attended UMass Dartmouth for a time before deciding to join the Guard.

“I didn’t know what I wanted to do, but I knew I wanted something different,” he said.

Since joining nine years ago, Bates has been deployed twice out of state: once at Guantanamo Bay in Cuba and once along the Southwest border. Each deployment lasted about a year.

Working alongside Southcoast Health staff gave members of the Guard a “sense of the reality” that medical staff have been facing since the pandemic took hold in southeastern Massachusetts and Rhode Island in March 2020, Bates said. “It has been eye opening. You always have to stay ready.”

The Guard members have provided comfort and reassurance to both medical staff and patient families when emotions are running high.

“Every Guard member is friendly, smiling and engaging with staff and patients,” said Kimberley Coon, Executive Director of Hospital and Medical Staff Services for Southcoast Health. “They boosted morale.”

Now that the number of COVID hospitalizations is falling, the end is in sight for the Guard members, whose deployment in Southcoast hospitals is expected to end on March 20. Southcoast medical and support staff say they are grateful for their presence and the lift they have provided.

“It’s been challenging,” said Coon. “We know the public has had enough of COVID … and having the National Guard presence in the lobby deflated some of the tension. They brought a certain demeanor that was very comforting.”