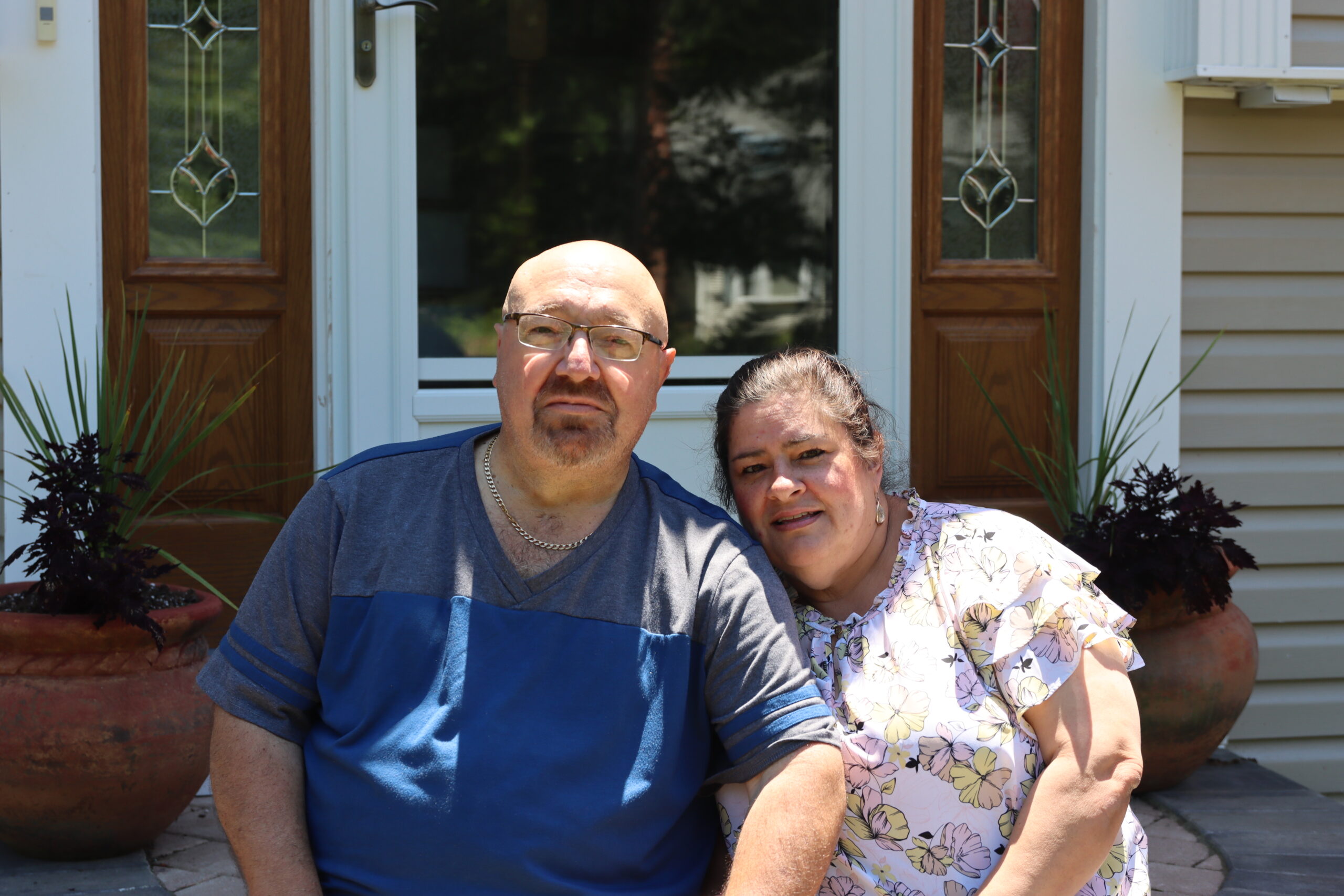 John Colucciello shares how he recovered at Southcoast Health

A swarm of wasps changed John Colucciello’s life dramatically last August, while he was working on his deck railing. He lost his balance as he swatted the insects away and fell about three feet, slamming his head on the concrete floor.

“I don’t remember much,” he said. “Luckily, my wife was upstairs making dinner. I yelled for her, and she saw me on the ground.”

Marilia, his wife, called 911 and an ambulance delivered him to Charlton Memorial Hospital, where he arrived unconscious.

John was placed on a respirator and rushed to the St. Luke’s Trauma Center, where Dr. Michael Harrison, Southcoast Health neurosurgeon, performed a craniotomy to stop the bleeding on his brain. Family visits were strictly limited because of COVID-19, so Marilia had just five minutes with her husband before surgery. She left the hospital not knowing if she’d see him alive again.

“I went to my sister’s house in Fall River and just prayed and cried,” Marilia said. “They told me the next 72 hours were crucial, so I waited by the phone.”

John entered a coma that lasted five days, with Marilia visiting and talking to him daily. The nurses assured her that he could hear her. One day, he opened his eyes and started looking around. He couldn’t speak because he was on a respirator, but he nodded yes when the nurses asked if he was looking for someone.

He wrote “wif” on a piece of paper.

“I didn’t know where I was when I woke up,” he said. “I was confused. I hadn’t seen anyone, talked to anyone. Finally, I saw my wife. Things started to improve, and I felt better.”

John remained at St. Luke’s for a total of three months, but recovering from his brain injury was only part of his challenge. In October, he returned to Charlton Memorial, where Dr. Seth O’Donnell performed a five-hour operation to repair his left foot, which had broken in the fall.

His doctors urged him to go to a rehabilitation center, but Marilia insisted he return to their Dartmouth home, and John agreed. “I never thought I’d see this house again,” he said.

He arrived home in a wheelchair in November, shortly before Thanksgiving, and began a rehab journey that continues today. John said his doctors are amazed at how far he has come. Southcoast Health physical therapists visited his home regularly, and with Marilia’s dedicated attention and his own determination, he can now walk and has overcome the swallowing difficulties caused by the tracheotomy. Though the fall damaged hearing in his right ear and sometimes he has trouble remembering words, “I can still carry on a lively conversation,” John chuckles.

“They call me the St. Luke’s Miracle,” he said. “The doctors were blown away at how quickly I’ve recovered.”

Though he has made immense progress, John tried to return to work in January and found it difficult. He holds out hope that he will improve to the point that he can hold a part-time job and do yard work and home repairs.

“At 62 years old, I thank God every single day for giving me the strength to battle through this,” he said.

In the meantime, he focuses on doing his exercises, taking daily walks and eating well. Despite continued challenges with pain and his memory, he remains optimistic and determined to continue improving. He is grateful to the doctors and clinical teams at St. Luke’s and Charlton Memorial that saved his life and got him well enough to return home.

His wife has been a constant help and source of support, he said. He also extends thanks his sister-in-law Eva, her husband Larry along with his goddaughter Courtney, niece Tanya and her husband Nathan, who helped pull him and Marilia through this difficult time.

“I’m blessed,” John said. “I wasn’t supposed to be here. I have a lot to be grateful for.”

Click here to learn more about the Brain and Spine Center at Southcoast Health.