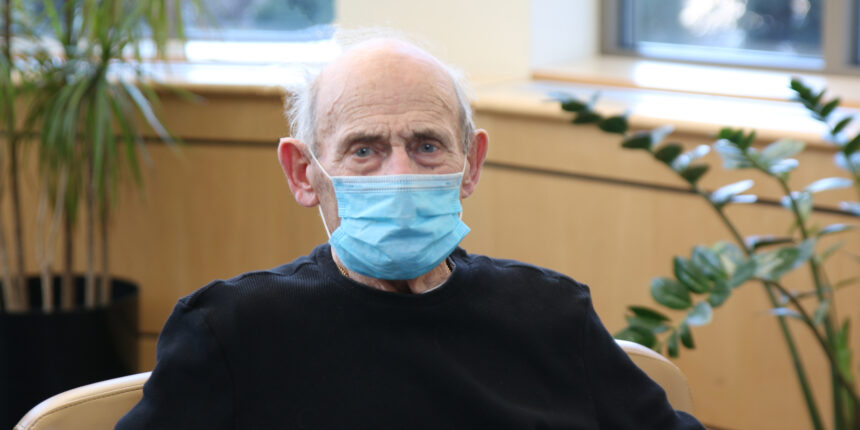 George Washburn’s ticker is still going strong thanks to The Heart and Vascular Center and the exceptional care team at Charlton Memorial Hospital.

When we refer to the human heart as a “ticker,” it evokes thoughts of a ticking clock. Tick. Tick. Tick. Thump. Thump. Thump. Our heartbeats indicate we are alive and, just like a clock, tells us we are here on this planet a little longer with each passing second. There is one man whose ticker continues to beat strongly with the help of the Southcoast Health Heart and Vascular Center at Charlton Memorial Hospital in Fall River.

George Washburn is 86 years old. He prides himself as an active man who still enjoys his commercial painting job. He is a happy fellow who eagerly expresses gratitude for his life on the South Coast, his wife and two grown children. “My life is complete!” says George with a chuckle – but there was a point in time when he wondered if he would someday feel this way.

In 1991, George was a patient of Dr. Jay Schachne, a now retired Southcoast Health cardiologist and current Board of Trustee, who at the time was in private practice in Fall River. George had been experiencing troubling cardiac symptoms, which prompted Dr. Schachne to order a thallium stress test. Test results indicated the presence of significant coronary artery disease. It became clear that time was of the essence, and Dr. Schachne recommended George immediately undergo a cardiac catherization – a test that precisely locates cardiac problems such as blockages, valvular and congenital heart disease.

At the time, Cardiac catheterization was a newly established service at Charlton Memorial, so new that George Washburn was going to be the first patient. “For the first time in my life I was going to be first,” George was quoted in the Fall 1991 Issue of Charlton Pride, a newsletter for the Charlton Memorial community. The catherization was a success and critical in diagnosing George with severe coronary disease which required open heart surgery.

Soon after the diagnosis, George traveled to Providence to have a triple bypass but continued his care with Dr. Schachne and the team at Charlton Memorial Hospital. Little did George know at the time, that being the first cardiac catheterization patient represented something momentous on the South Coast.

The cardiovascular care services at Charlton Memorial Hospital were growing and with that, a commitment to the community to evolve into a comprehensive, state-of-the-art, heart center, offering the same services found at academic and metropolitan heart centers, so patients like George wouldn’t have to travel far to get the care they needed.

Today, more than 30 years later, George still receives his cardiac care at Southcoast Health. From his first catherization in 1991 to now, George has benefitted from the constantly advancing care offered at the Southcoast Health Heart and Vascular Center, which is now celebrating its 20-year anniversary.

Following his bypass surgery, George needed multiple cardiovascular procedures through the years, including Coronary stents, intravenous ablation, a pacemaker and most recently transcatheter aortic valve replacement (TAVR), to replace a failing valve. Fortunately for George, all of his care and procedures were able to be performed at the Southcoast Health Heart and Vascular Center with a team that knows him well.

“George is a great example of what a health care system can do when it commits to creating world class care close to home,” says Dr. Peter Cohn, Physician in Chief of the Southcoast Health Heart and Vascular Center. “He has trusted us with his care needs for more than 30 years and is living a long, fulfilling, and active life. At 86 years old, he is still able to climb a ladder for his commercial painting work.”

George was Dr. Schachne’s patient until 2020, when Dr. Schachne retired. “When we look back at the big picture of the Southcoast Health Heart and Vascular Center, it’s really all about the people like George. I was privileged to have his trust and guide him through years of cardiac care. He’s received cutting edge care right here in his community by a team of top-of-the-field professionals. At every corner, we have worked to give George the best opportunity to lead a fulfilling life,” says Dr. Schachne.

Elizabeth Tivnan, NP, also has worked with George for the last 15 years. “Our provider relationship has been built on trust, understanding and compassion. My goal as one of his providers, is to provide George with exceptional care, in collaboration with the entire cardiology team; so that he could have the quality-of-life and the functional ability he deserves.”

This past January George met with Dr. Adam Saltzman for a follow up regarding his TAVR – a replacement heart valve. When asked how it went, George responded happily, “I’m on no restrictions! In about three weeks, I’ll be back to normal.”

Preventative action is the first step to heart health. For more information regarding services, or to find a cardiologist, please visit https://www.southcoast.org/services/cardio-heart-vascular