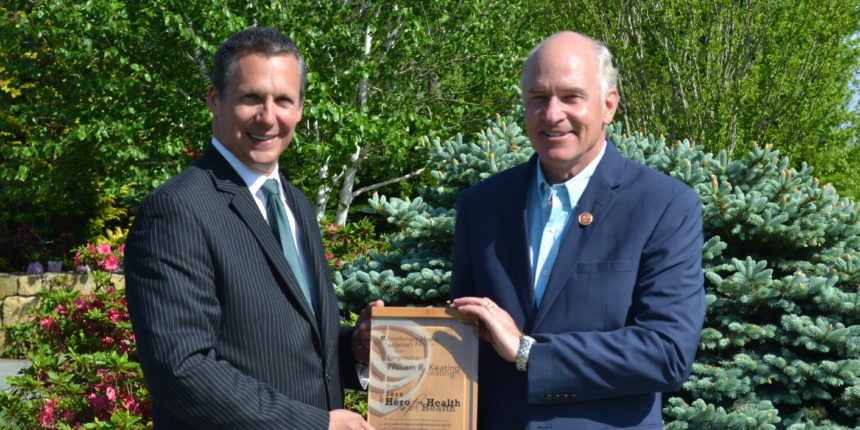 “Throughout his career, Congressman Keating has been a staunch supporter of vital healthcare initiatives and improvements for our region and the Commonwealth as a whole,” said Keith Hovan, President & CEO of Southcoast Health. “He is a leading voice on a number of health-related issues, and is often ahead of the popular groundswell in identifying areas of need. He is truly deserving of this recognition.”

Congressman Keating has been a leader in the effort to combat the opioid epidemic, sponsoring legislation which promoted tamper-proof pharmaceuticals, increased access to drug take-back programs and the expansion of drug monitoring programs.

“I have long been committed to improving the quality of healthcare for my constituents and I am appreciative of Southcoast Health for recognizing those efforts,” said Congressman Keating. “Health systems like Southcoast continually rise to meet new public health challenges, and Congress needs to follow suit. I will keep working in Washington to lead efforts to ensure our healthcare systems have the tools needed to support our communities.”

In 2013, during the government shutdown, Congressman Keating worked with the Directors at the National Institutes of Health to prioritize access to essential treatments. He cosponsored the 21st Century Cures Act, federal legislation which increases funding for research related to modern treatments for diseases including cancer, diabetes, ALS and Alzheimer’s. He is a champion of the Veteran’s Choice Act, which increases access to healthcare for veterans, and fought against Medicare Disproportionate Share Hospital cuts, and reductions in the Medicare Area Wage Index.

Congressman Keating served in the Massachusetts Legislature as a State Representative and State Senator from 1977 through 1999, and served as the District Attorney of Norfolk County from 1999 through 2011.

He has represented the 9th Bristol Congressional District, which includes Fall River, New Bedford, Wareham, the South Shore and the Cape and Islands since 2011. He is currently a senior member on both the Foreign Affairs and Homeland Security House Committees.