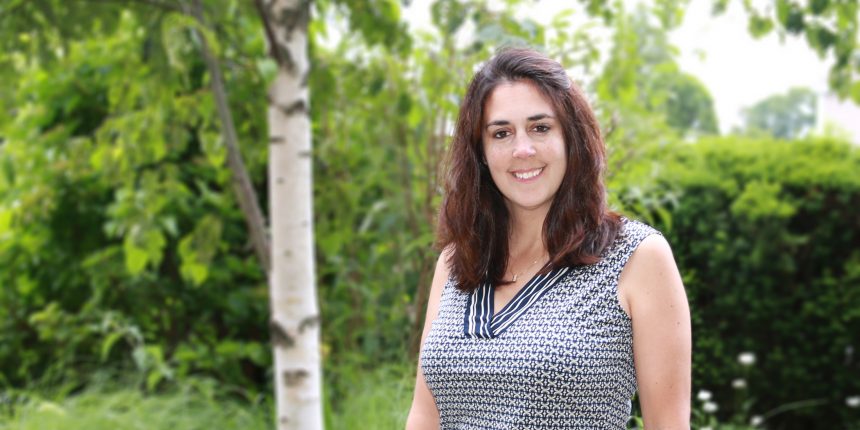 You might see her conferring with doctors and nurses, huddling with worried parents, explaining a medical procedure in terms a child can understand, or engaging a child or teen in any number of activities – studying a page from an I-Spy book, blowing bubbles, coloring, playing a video game.

March is National Child Life Month, and Kara is Southcoast’s Child Life Specialist, a professional role she brought to St. Luke’s eight years ago and has worked on developing ever since.

Trained in child development and psychology and then later in leadership and administration at the graduate level, Kara’s job is not simply fun and games.

“Think of the role as part social worker and part educator, but in a medical setting,” she says. “I work with children of all ages, even teens, and those with a variety of medical conditions.”

She helps soothe children by diverting their attention from thoughts that cause stress and anxiety, as well as by relieving boredom and even loneliness. She helps children through the anxiety that can occur from being in an unfamiliar place like an Emergency Room or other serious situation such as preparing for surgery. Her important work also supports the care team in their clinical work – a calm child is one who’s easier to care for. She also helps overwhelmed parents by providing information, support, and even some coaching. They sometimes don’t know what to do or how best to help in the midst of a medical situation.

And those bubbles? Well, they aren’t always just for play. They’re used to help children build lung strength when recovering from a respiratory ailment.

“What’s most satisfying is when I can help a child who has a lot of fear,” Kara says. “Talking with them, being encouraging, explaining what’s going on – helping to alleviate their anxiety.”

Kara’s extroversion, patience, empathy, compassion, and even-keeled strength and her ability to take the emotional temperature of a room serve her well in role.

“Having Kara in her role helps the nursing staff when we have to focus on a clinical responsibility, and it helps in those situations when a parent can’t be present with their child,” says Kim Pina, RN, Manager of Patient Care. “Kara is the best person for the job. She is a really great part of the care team. She is great with kids, mild-mannered, and full of ideas – which she shares with the nursing staff.”

Kim says in Pediatrics, care teams try to make a child’s experience as seemingly normal as possible. It can be scary to be in a hospital with “strangers” all around. It helps to bring into the hospital setting what a child is missing by being in the hospital, as when the pediatric staff held a graduation – with cap and gown and diploma – for a girl missing out on her pre-school graduation ceremony.

“We even had her walk the hall to get her diploma,” Kara says. “The mother was so appreciative. It’s important for kids to have opportunities for normal developmental activities.”

Children themselves recognize it. One child, who had been a patient at Boston Children’s, said upon arriving at St. Luke’s, “’I hope you have a Child Life Specialist here.’ … She wanted that support,” Kara says.

Joining Southcoast with a Great Deal of Experience

Kara brought a great deal of experience to Southcoast, having worked at Mass General and Newton Wellesley Hospitals for 18 years combined. At first, she was brought on as a consultant for a year to start the program. Afterward, with the chance to run the program, she decided to stay on.

Kara also has a full life outside of her professional work.

“We just a bought a house on the Cape in Falmouth. That’s been my big excitement lately,” she says. She enjoys going for walks on the beach with her husband and two daughters and some “moderately” adventurous four-wheeling with their jeep. She lives in Middleborough, but New England hasn’t always been home. She was raised in a military family. “We moved every three years,” she says. In fact, she was born in Okinawa and lived in Germany for a time.

Fortunately for Southcoast – and for the many children and parents Kara has helped – she settled in our area. Thank you, Kara, for your years of service to Southcoast and St. Luke’s. May there be many more.