All Southcoast hospitals and facilities…

TB testing screens people for tuberculosis (TB) infection. It’s possible to have a TB infection without it causing symptoms (known as latent TB). In some people, it progresses to active TB disease with symptoms. People with symptoms are contagious. Identifying latent TB infection allows doctors to treat it and prevent active disease from developing and spreading to other people.

If you have symptoms of tuberculosis (such as a cough, weight loss and fever) or need to get a TB test in Dartmouth, Fairhaven, Fall River, Lakeville, Seekonk, Wareham, MA, or Middletown, RI come to Southcoast Health for urgent care and more.

There are two types of TB testing that we offer:

Not everyone needs TB testing. However, it is useful in people at high risk of developing TB infection, including:

You may also undergo TB testing when you start a new school, college or job.

There are very few risks with TB testing because it doesn’t use live bacteria. It’s possible to experience the following:

What to Expect with a TB Test

No preparation is necessary for TB testing. You can get a TB test at your nearest Southcoast Health Urgent Care Center and in other professional medical settings.

For the TST, you will return to your healthcare provider in 48 to 72 hours. Your provider will check for a red, raised or hard area and measure the size of it. A positive test means you have TB bacteria. More tests will determine whether it is latent TB or active TB disease.

For the TB blood test, your healthcare provider will review the lab results with you. If your blood reacted to the test, it is positive. This means you have TB bacteria, but need more testing to determine if it’s latent or active.

Southcoast Health provides urgent care and TB tests  for patients across southeastern Massachusetts and parts of Rhode Island at our centers in Dartmouth, Fairhaven, Fall River, Lakeville, Seekonk and Wareham, MA as well as Middletown, RI. 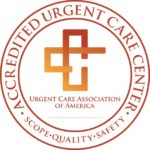